At the recent Chile Pepper Fiesta (great write-up & photos here), I was shaking up drinks a few booths over from the Bhut Jolokia folks, who make products using the Bhut Jolokia chile pepper, also fondly known as the Ghost Pepper. 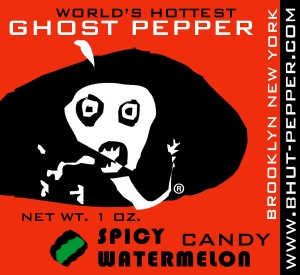 If you’re not already familiar with these bad boys, Bhut Jolokia peppers are waaaayyy up there on the Scoville scale — hotter than Habaneros, hotter than Scotch Bonnets, and allegedly, the hottest known pepper of all. The peppers are widely sold at Kalustyan’s and elsewhere, but the Ghost Pepper guys in Brooklyn were smart enough to package and sell them — and best of all, they make a Spicy Ghost Pepper Watermelon Candy. Oh yes. And it’s inspired me to create a boozy version:  The Ghost Pepper Cocktail.

Here’s the recipe. It may seem a little sweet – but trust me, you need a little extra sugar to help mellow the Bhut Jolokia burn. I dare you to serve this at your Halloween party this year!

Pour the watermelon puree, simple syrup, vanilla vodka, and lime juice into an ice-filled cocktail shaker. Shake vigorously, and strain into a tall glass. Top up with lemon-lime soda. Serve with a straw (or two).

Combine water and sugar in a small saucepan. Heat to a boil, continuously stirring until the sugar dissolves. Once the water starts to boil, lower the heat to a simmer. Add the dried pepper to the simmering liquid.

Allow to simmer, uncovered, for 10 minutes. Remove from heat and cool to room temperature. Remove the dried pepper. Pour the syrup into a container and keep in the refrigerator.

NetworkedBlogs
© Kara Newman and Tipple Sheet, 2014. Unauthorized use and/or duplication of this material without express and written permission from this blog’s author and/or owner is strictly prohibited. Excerpts and links may be used, provided that full and clear credit is given to Kara Newman and Tipple Sheet, with appropriate and specific direction to the original content.
Loading Comments...