Wow – so this is what it’s like to drink a cinnamon bun?

Not long after my post on Fireball Whiskey ran, I received an email from the PR rep working with Hiram Walker on the re-launch of their “Original Cinn” cinnamon schnapps. Would I like to receive a sample? Boy, would I!

Here’s a photo of what the Liquor Fairy brought, in one gi-normous box:  vodkas and liqueurs labeled as “The seven deadly sins” (Cinns) – get it?  For whatever reason, the cinnamon schnapps was tagged as “Pride.” 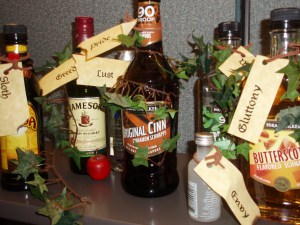 So how was the spirit? It has a HUGE vanilla aroma, and a sticky-sweet vanilla icing flavor with just a bit of cinnamon sizzle on the finish. It’s a little over-sweet and strong (90 proof) straight up, but I know folks who would enjoy this as a shot. I think it could be a nice addition to a creamy cocktail, maybe with vodka and cream as a modified White Russian (quick, someone name a Russian pastry!). A recipe on the back of the bottle suggests 2 parts cinnamon schnapps to 5 parts apple cider – that too could be a palatable drink. A splash in hot apple cider would be divine.  I dare you to garnish it with a mini cinnamon bun.

It’s not a sophisticated flavor, but it’s tasty and goes down a little too easy, if you know what I mean. But that’s schnapps for you.  I would prefer this with more heat to it – the cinnamon note is very subtle.

The verdict:  I would have loved this in college, but it’s a little sweet for me now.  That said, I am all kinds of excited to see more cinnamon-flavored spirits coming on the market.